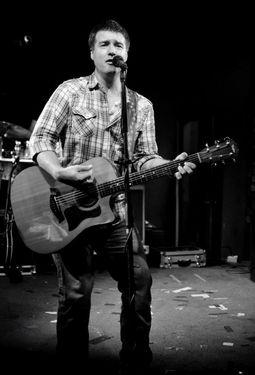 Brandon has been singing and performing since the age of 5, and it comes as no surprise being the grandson and son of musicians. His Grandfather played fiddle and sang in Bluegrass bands throughout the 30’s & 40’s, and his Father is an avid banjo and guitar player. This musical environment growing up fueled his desire for the spotlight. There’s no question Brandon was destined to be a performer and songwriter. It’s in his blood.

In High School, he spent hours singing & playing in bands learning the ins and outs of the performing scene. While in school at Oklahoma State University, Brandon teamed up with Jordan Doolen and Kit Nowlin to form the rock band Twelve Pearls. The band would span 6 years, 2 albums, and a countless number of tour dates and fans around the world. Not to mention sharing the stage with bands such as Cross Canadian Ragweed, The All-American Rejects, Hinder, Robby Krieger of the Doors, and many more. Music has always been a passion for Brandon, and after transferring from OSU, he graduated with a Bachelor’s Degree in Music and Business Administration from Oklahoma City University.

One of the places that shaped his sound is playing several years on the legendary "Strip" in Stillwater, OK. Playing with Twelve Pearls as well as acoustic shows on the Strip opened up a world of music. The Stillwater music scene embraced every type of musician and allowed Brandon to grow musically and hone his performance skills. It was in this scene that Brandon met Steve Rice and together they began performing a weekly acoustic show at the Wormy Dog in Stillwater.

Not long after that, Brandon was asked to join the band No Justice. With a tour schedule of 180 shows a year, 1 studio album, and a Live at Billy Bob’s album under his belt over a 5 year stretch, he firmly planted his feet in the Red Dirt/Texas Music scene. His writing contributions on the self titled No Justice album include: Still Missing You, Breathe, and By My Side.

After a very successful tenure with No Justice, Brandon decided to step out on his own and pursue a solo career. He soon released his first CD titled "The Good Times" and has been performing acoustic & full band shows to promote the CD. Currently he's working on his next studio album to be released in the near future and booking full band and acoustic shows to prepare for that release. Brandon has had the honor of sharing the stage with Eli Young Band, Turnpike Troubadours, Shane Smith & The Saints, John Fullbright, Whiskey Myers, Mike Ryan, The Damn Quails, Stoney Larue, Brandon Jenkins, Adam Hood, Chad Sullins, The Red Dirt Rangers, & Jason Eady just to name a few. If you're interested in booking Brandon, please email booking@brandonjacksonmusic.com.